“The Black Book” Play Review: Are You Slowly Going Crazy? 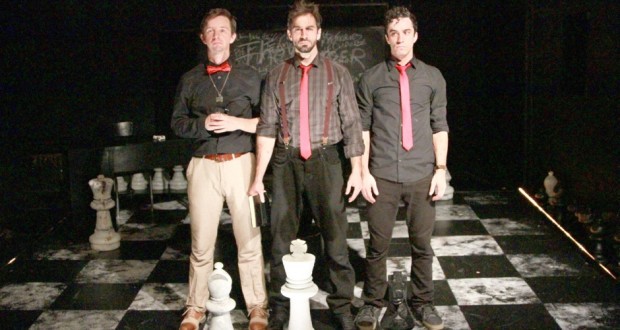 The mystery thriller, The Black Book, has just hit the Off-Broadway play scene and is taking its audience by storm. Debuting during Suicide Prevention month in September, the mesmerizing play challenges its viewers to “read between the minds” as they work side-by-side with the characters to determine what causes someone to want to kill him or herself. With the concept sparked by a personal loss, writer and director, Phil Blechman throws his audience into an enthralling story that forces them to always be thinking one-step ahead.

The plot follows the intertwined stories of eight characters, all somehow involved with the protagonist, Archer. After leaving an ominous suicide note on the desk of his professor, Arthur. He and his colleagues must investigate Archer’s life in an attempt to save him from committing an unthinkable act against himself.

The setup of events in The Black Book runs parallel to how mental illness plagues its victims; it is fast, the scenes lit, then darkened, events happen somewhat chaotically, leaving its viewers confused yet intrigued. Ultimately, Blechman hoped to leave his audience questioning the events of the play and hopefully spark a dialogue about a sensitive topic that is all-too-often disregarded: suicide.

“[The play’s events] are misdirection in a way. By getting the audience to talk about solving the play, they ultimately start a dialogue about this unknown of ‘what drives a person to murder him or herself?’”

The Black Book will leave you talking about it for days and, more importantly, thinking more deeply about mental illness than you ever have before. It is confusing, yet mesmerizing. It is convoluted yet addicting… much like mental illness itself.

When writing The Black Book, Blechman’s goals extended far beyond receiving views or press. He hoped it could spark conversation about a topic that so crucially needs to be discussed.

“I hope people leave the show with an opinion [on suicide]. And then I hope someone they came with challenges that opinion with their own and vice versa. I believe that’s the first step to ultimately finding a legitimate solution.”

The question of why someone commits suicide does not always have a solidified answer. Similarly, neither does The Black Book. The answer to the way the play ends is, purposefully, left entirely up for interpretation. The point is not to know the answer; the point is to begin understanding the reasoning behind it.