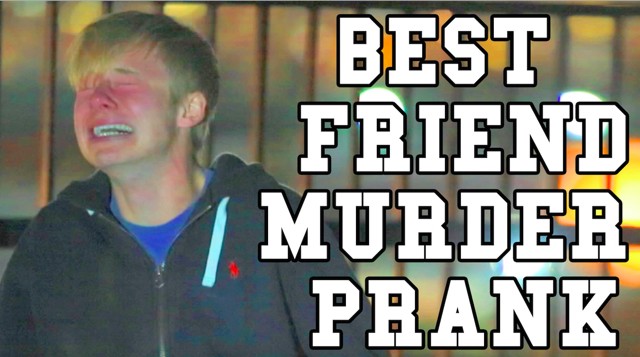 On Saturday, Sam Pepper uploaded a YouTube video that would turn the entire Internet against him. It was called “Killing Best Friend Prank” with a thumbnail that pictured a fearful, red-faced boy.

The video featured popular Viner pair Colby Brock, who was in on the prank, and Sam Golbach, who played the victim. In the prank, Brock pretended their car broke down, and they were met by an “attacker” – Sam Pepper wearing a mask. Pepper and Brock threw a bag over their friend’s head, duct-taped him, and threw him in the trunk of his car. Golbach was frightened for his life, as the “attacker” pointed a gun at both boys when they reached their location. He screamed, “We’re just kids!” and more desperate phrases through tears, while also reassuring his friend “Everything’s gonna be ok.”

Sam Pepper, still pretending to be a ruthless attacker, aimed and fired a fake gun at Colby Brock, who pretended to die on the ground right in front of his best friend. Sam Golbach was screaming in agony after just witnessing his best friend of five years shot to death; only  this whole thing was a prank. After a few seconds of Brock being “dead,” Brock woke up to tell his friend that it was all fake.

This prank has the Internet outraged, and Sam Pepper is getting hate that he deserves after uploading this video. There have been anonymous threats towards him, extremely angry and critical YouTube comments, and even long, detailed response videos.  Everyone wants to see Pepper’s video taken down, his channel reported, and many even want him in jail.

Unfortunately, this is not Pepper’s first account with a prank gone horribly wrong. Last year, he uploaded a video called “Fake Hand A** Pinch Prank.” In the video, he would talk to random girls on the street, and secretly grab their butts with his hidden hand. Again, people were outraged over this prank because he was sexually assaulting unsuspecting women and made a joke out of it. The video was reported more than 26,000 times, and eventually taken down from his YouTube channel.

Another prank that went too far was on celebrity icon Paris Hilton, who thought she was getting a ride on a small plane, but didn’t know that she was on a popular prank show. A few minutes into the ride, the plane starting malfunctioning and dropping from the air at intense speeds. Paris didn’t know that this was all set up, and was screaming and crying in fear and pain. She thought her life was going to end in that moment, while the people on the other side were laughing at her “hilarious” reaction. It was a cruel and senseless trick.

Pranks have always been popular on YouTube, but they seem to be getting a lot worse. There are several YouTube channels dedicated to pranking, such as ViralBrothers and PrankvsPrank. Many of their videos include physically injuring and mentally scarring people. Everyday, there are fake suicides, fake murders, and fake attacks made into videos and uploaded to YouTube. The victims in the videos always end up in agonizing fear or pain, and sometimes do not recover, even after it is revealed as a prank.

Pranks often make people fear for their own lives. Many of these YouTubers are more concerned with the number of views, and forget that they are seriously hurting their friends and family. Not only do they hurt people, but pranks are also an invasion of privacy. They all involve setting up hidden cameras that capture private moments and reactions. Most of the perpetrators don’t have permission from the victim to post the videos online.

The problem with pranks like the ones on Sam Golbach and Paris Hilton is that they could have long-term psychological effects that could cause permanent traumatization and anxiety. Savina Sikand said “People are trying too hard to be funny. They don’t realize the effect they have on the victim.” Megan Klepper, who also agrees that YouTube pranks have gone too far said “People don’t realize what they’re doing to the people that they’re doing the pranks on.”

They both believe that if you were being pranked, it would definitely not be funny. YouTube pranks have certainly gone much too far, and this growing trend needs to stop before people have serious mental or physical outcomes, just because their friends were senseless enough to joke about something serious.