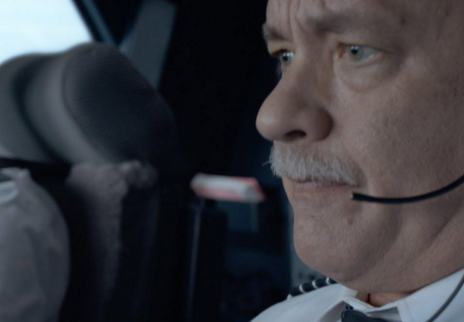 “Sully” is an adaptation of the memoirs of Captain Chesley Sullenberger, a currently retired airline captain who executed what was called the “Miracle on the Hudson,” an act so prestigious, it warranted Tom Hanks himself to play the starring role.

You’d think there wouldn’t be much about this movie that we didn’t already know, and well, you’d be right. Yes, Sully lands the plane, is hailed as a hero, and everything is all hunky-dory by the end. But that wouldn’t make for too involving of a plot now wouldn’t it? But I digress; the part that most are probably curious about is how the crash itself was handled.

A movie such as this needs some more conflict to it, one that doesn’t involve pesky birds and daring feats. Other than the landing itself, the story revolves around whether or not Sully’s decision was the best one, with his job and reputation on the line.

It is with these sections where the stakes of the film somewhat relax a bit, mostly because it’s somewhat difficult to top the highlight of the film. With his court trial, we know that Sully is going to win in the end; this is meant to be a feel good movie, something to commemorate a heroic event.

Because of the fact that the “Miracle on the Hudson” was indeed the heroic act that it was, with nothing to mourn but the plane itself, doesn’t really lead to a satisfying conclusion. The plane scene would have been a somewhat better conclusion to the film than Sully’s court case.

In a way, it’s this idea that somewhat reduces the potency of the whole film; while I understand this is fairly accurate to the actual events, the landing itself didn’t exactly take too long and Sully did, in fact, have to face some legal repercussions.

Perhaps we could have focused more on Sully’s Post Traumatic Stress Disorder, or him interacting with the adoring public; both of these examples were introduced briefly, but there wasn’t much of a solid conclusion to either, which I feel was wasted potential.

I will admit, however, that my heart was somewhat warmed by the “American spirit” that oozed out of the screen during scenes of valiant rescue units taking care of the passengers, all thankful to be alive. If anything, this film gives credit to those who deserve it.

To me, “Sully” was kind of an oddity in the theatre. I don’t regret seeing it, and the budget was put distributed well enough, but I doubt it’ll be something that will stay in my mind for years (or even a week or two) to come.

Tom Hanks basically carried this film to the box office pedestal that it currently sits at, and heck, he deserves it; he usually does.

But other than that, it’s a movie that doesn’t really want to color outside the lines, despite having pretty high quality crayons; all-in-all, just a very “safe” movie.