Covid-19 has given Hills students who work part-time new responsibilities on the job. The pandemic has also altered their work-school balance. 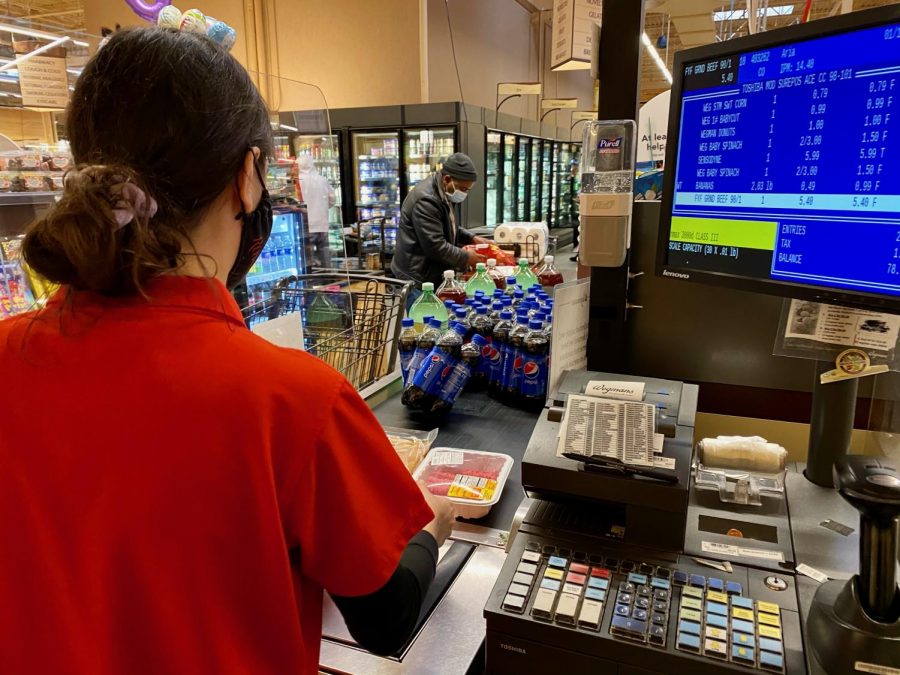 Aria Chalileh, pictured here checking out a customer, is a Hills senior who works part-time as a cashier at Wegmans.

Amid the Covid-19 pandemic, many students at Pascack Hills have continued working part-time. Some have even started new jobs.

In order to have a part-time job in New Jersey as a high school student, working papers must be acquired. Mrs. Monika Codner, a secretary in the Hills guidance office, assists students with this process.

After an employer offers a student a job, Codner explained that students’ working papers can be “picked up in [the guidance] office or found online.” From there, the student, employer, and student’s doctor complete their designated fields with the desired information or signature, and Codner takes the final step of signing off.

Compared to the 2019-20 school year, the number of students who signed off on working papers during this ‘hybrid’ school year has not shown a significant increase nor decrease and has remained “relatively the same” according to Codner.

A few students who have been working part-time during the pandemic include Hills juniors Kailani Perez, who works at Wegmans, and Krisha Sampat, who works at Chopt in Montvale. Hills seniors Aria Chalileh and Kyle Butler also work at Wegmans, while Liz Mashini works at Hallmark in Woodcliff Lake, Christina Ferraro at The Melting Pot in Westwood, and Alex Kostantas at Yuki in Montvale. Perez and Chalileh were previously interviewed by the Trailblazer last spring, when the pandemic hit New Jersey especially hard and redefined the roles of essential workers. 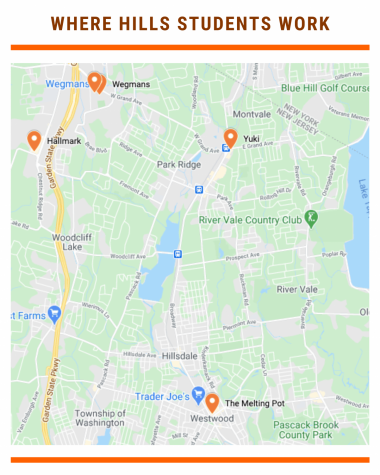 Some students have been working the same number of hours, while others have faced both increases and decreases due to the effects of the Covid-19 pandemic, which has forced many places to limit their customers and adjust their everyday employee routines.

“We stop seating people at 8:30 p.m. and cannot serve food or drinks past 10 p.m.,” Ferraro stated. On the contrary, Butler said that his hours at Wegmans increased as a result of not attending school in-person and having after-school activities canceled.

Sampat gave insight on working at Chopt, a self-described “creative salad company” which opened its Montvale location in November during the pandemic. “It was good to see that people still came to support the new place [amidst the pandemic] and come back because they enjoy it,” she said. 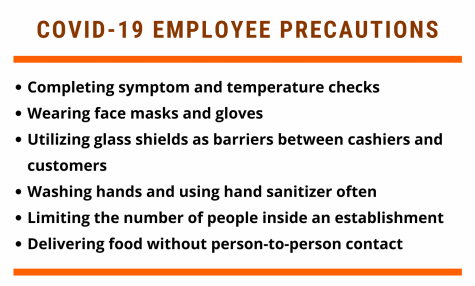 Safety precautions that these students follow include symptom checks, wearing gloves, utilizing glass shields as barriers between cashiers and customers, washing hands, using hand sanitizer often, and limiting the number of people inside.

Kostantas explained some additional guidelines as a delivery driver for Yuki, explaining that drivers like him “now do contactless delivery where I leave the food by the door and they leave cash in an envelope for me when I get there if they pay with cash.”

Fortunately for these students, most customers they have encountered have been following guidelines provided by the Centers for Disease Control and Prevention.

Mashini reported that some of her coworkers have had to tell people to fix their masks. “Most of my coworkers are adults, so whenever someone wears their mask below their nose, takes it off, or any other issue, someone else will talk to them; I never have had to deal with any issues like that,” she said.

However, Sampat stated that some customers at Chopt “don’t cover their nose [with their mask], and if we ask them to repeat something, they’ll pull their mask down to say it.” This upends the purpose of wearing the mask. On the contrary, other customers will wear “two masks and maintain as much distance as possible.”

Some of these workers have seen both more and fewer resources available as a result of the pandemic and its sometimes surprising effects on customer shopping habits.

“Wegmans does put a limit on certain items to make sure they have enough in stock for everyone,” Chalileh said.

In the earlier months of the pandemic, Butler explained that “multiple items in the store were out of stock, and we did not have any information as to when we would restock [them].”

However, at Hallmark, Mashini said that “specific cards have not been replenished in forever… We have tons of aunt birthday cards, but the uncle section seems empty.”

Working part-time during the pandemic has also led to split opinions on the work-school balance. Some have felt an increase in coursework, while others have been able to work extra hours at their job.

“Due to Covid-19, I have found that teachers tend to load way more work on their students than they normally would because we are at ‘home’ and have ‘more time,’” Perez commented. Ferraro finds managing work and school “easier to balance because there’s less [school]work.”

Kostantas said that he has made “more revenue” as a delivery driver since people are home more often. Butler and Chalileh explained that they are working more and less, respectively.

“The pandemic has allowed me to work more due to fewer hours spent in school or at school participating in after-school activities,” Butler stated.

Chalileh has had a different experience working as a cashier at Wegmans, saying the pandemic “has prevented me from picking up extra shifts during my free time, because I want to make sure I am staying safe and avoiding as much contact as possible so I can continue going to school in-person.”

Though Hills students with part-time jobs have been forced to adapt to different ways of working during the pandemic, adults at Hills, like Codner, are proud that they are continuing to work despite the challenges and the persistence of Covid-19.

“I think that it’s great,” Codner said. “If they can do it, great. It’s encouraging.”