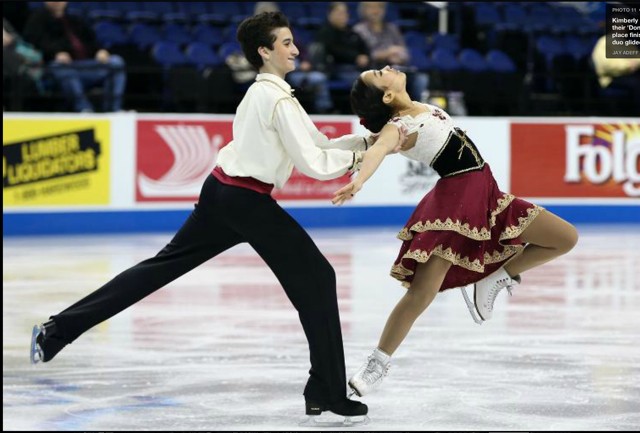 Hey, Hills! Every Trailblazer issue, we will be featuring a different student. The star of February’s issue is junior Kimberly Wei. She dedicates a lot of her self to figure skating, and somehow finds time to be involved in school activities, too…if only we could all balance our activities so well! Easygoing and extremely easy to talk to, Kimberly is definitely someone I enjoyed interviewing. Read on and learn more about who she is!

Q: Who is your biggest inspiration?

A: Ever since I was really little, like when I first started skating, it was Michelle Kwon, as cliché as that sounds. My vice principle at the time actually gave me a book about her, and that kind of fueled my admiration of her even more.

Q: What are your favorite school subjects?

A: I like science a lot. Right now I’m taking bio and physics, but I also like chemistry.

Q: Who are your favorite artists?

A: I really like One Republic and Imagine Dragons.

Q: What do you do when you’re not on the ice?

A: I watch TV…a lot. But I’m also on the debate team and I am part of Science Olympiad.

Q: Where do you see yourself in 10 years?

Q: How do you balance skating, extracurricular activities, and schoolwork?

A: You kind of just have to do it! I don’t really have any like tricks or anything. It’s just that when you have free time, you have to take advantage of that.

Q: When did you start figure skating?

A: I started when I was seven.

Q: What is your favorite thing about it?

A: I think it’s the sense of accomplishment once you actually master something. It takes a lot of work and nothing comes really easily because it’s not really that natural, so at the end of the season when you feel like you can do everything perfectly, and you’re not like dying at the end, you feel really great.

Q: Do you get nervous before you skate?

A: Oh yeah. Before I compete, it’s really nerve-wracking because it’s in a stadium, so there are people that are like really far up into the stands, and you have to project to them. You feel kind of small because everyone’s looking down on you and everything’s so bright…I get really, really nervous, but afterwards, it feels really good to have done that.

Q: What do you mean by having to “project” to the audience?

A: Well, ice skating is really like a performance, so you have to connect with the audience, and you have to make sure that even the people at the top of the stands can understand what you’re trying to portray.

Q: Is ice-skating like dancing, where there are different types (such as lyrical, interpretive, etc.)?

A: Yeah. Actually I do ice dancing, so it is like dance, where there are different types. We have two programs that we have to do. One of them is picked for us, like a specific type-it’s either like a waltz or tango, and then there’s a free dance. That’s where we can do whatever kind of music we want to do, so that’s where we have freedom to do what we want.

Q: Do you have a favorite trick?

A: I like lifts because I think that they’re the coolest out of all of them. They’re the most impressive to watch and actually be able to do.

Q: How often do you practice skating?

A: Previously, it was four days a week, except now we’re increasing the number of hours that we’re skating because we’re going to the international level. So it’s probably going to be every single day, for at least two hours- probably more on some days.

Q: How often do you compete?

A: There aren’t that many competitions during the season. There are a few in the beginning, like one or two in the summer, and then maybe another one in the fall, but the really important ones are the qualifying competitions. Those start with sectionals, and if you qualify you get to go to nationals. If you’re at a high enough level at nationals, then you get to go to worlds.