The teacher of the year enjoys his job because of his colleagues and his passion for mathematics and computer science. 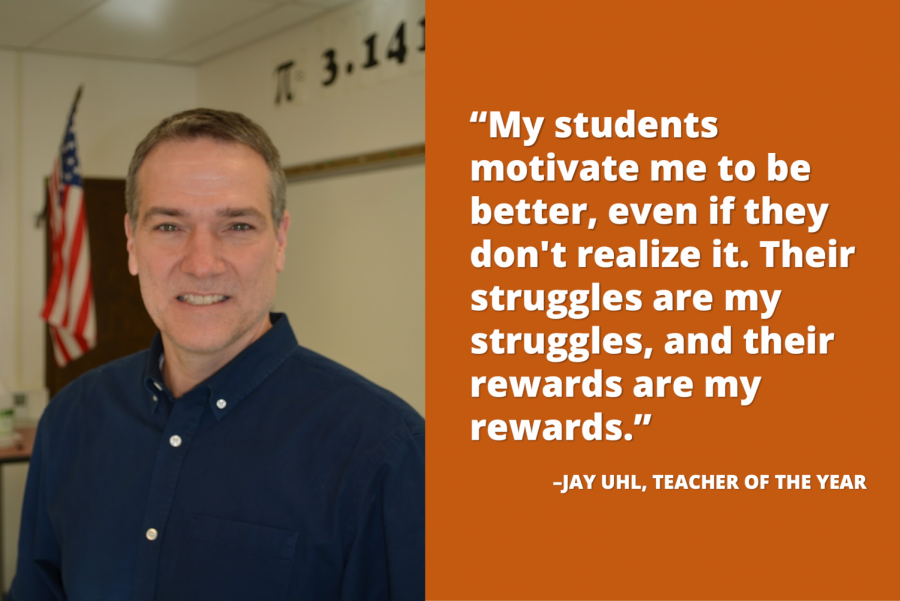 Uhl learned of the award from Superintendent Erik Gundersen, who was joined by several teachers in congratulating him before the Teacher of the Year was announced over the loudspeaker.

Uhl has been teaching at Hills for 18 years. At first, he began his career in business; however, the Villanova University graduate decided to embark on a new one which he enjoyed more: teaching.

“After working in the business world for four years, I felt that I was on a path that didn’t feel right to me. I always liked math and decided to go back to school to get my math and teaching degree,” he explained. 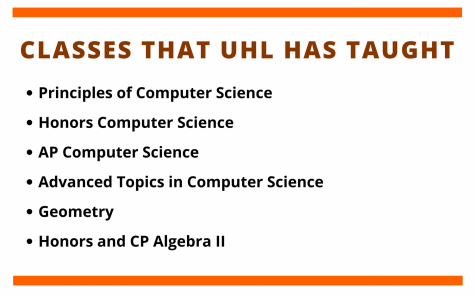 Once he returned to school at Montclair State University, where he received his master’s degree, Uhl was confident in his career switch.

“I knew immediately that I had made the right decision,” Uhl said. “It was in grad school that I found my love for math. It wasn’t boring, it wasn’t a chore, it was elegant and beautiful. That’s the feeling that I want my students to have.”

Outside of the classroom, Uhl has a few musical hobbies.

“I enjoy playing guitar and singing. I have played in various bands, often with Mr. Sandt. We had a lot of fun recording the ‘dismissal video’ for Mr. deMarrais’ final week as principal last year,” he said.

The teacher of the year enjoys his job because of his colleagues and passion for mathematics and computer science.

In terms of his best moments at Hills, Uhl was not able to choose only one favorite memory with his colleagues because he has many. “I have thousands of best memories, at least one for every colleague that I have known in my career here. I hope to have thousands more,” he commented.

In addition to the two other reasons mentioned above, Uhl loves to teach because of his students.

“By far, my favorite part of teaching is getting to know the students and finding new and different ways to inspire them. I hope that my students sense my enthusiasm for learning, and see learning as a journey that is not just theirs, but that we are all still on that journey.”

A few Hills students spoke out about how Uhl has impacted them. Sabrina Moe, a sophomore at Hills, had Uhl for Computer Science last year.

“Mr. Uhl was a really funny and great teacher. He had cheesy jokes that helped make the class engaging. Even though I don’t have him this year, I would definitely want to take his class again,” she explained.

Aria Chalileh, a senior at Hills, is a teaching assistant for his Honors Computer Science class his year.

“I have had Mr. Uhl as a computer science teacher for all four years of high school. From the very first class, I realized that Mr. Uhl was very encouraging. He always wants students to try concepts on their own, participate in class, and have fun with coding. [He] is extremely dedicated and puts a tremendous amount of work in to make sure that he is being the best teacher he can for each of his students,” she stated.

Uhl has also impacted Hills sophomore Izzy Gudin, even though she has not had him as a teacher. “Mr. Uhl has helped me often after school with understanding math when I was confused, even though he isn’t my teacher!” she said.

The impact left on the students is mutual for Uhl.

“My students motivate me to be better, even if they don’t realize it. Their struggles are my struggles, and their rewards are my rewards. There is no more powerful, emotional, and motivating experience than when a student tells me that they are choosing a major or a career based on their experiences in my class,” he stated.

For students who are interested in taking on a teaching career path, Uhl has a few words of advice.

“Being a teacher is not what you do; it’s who you are. Get some experience early so that you can determine whether it’s truly who you are. You have to want to be there. Think back on your former teachers; you may not remember everything (or anything) they taught you, but you remember experiences. All students are worthy of teachers that provide positive experiences.”