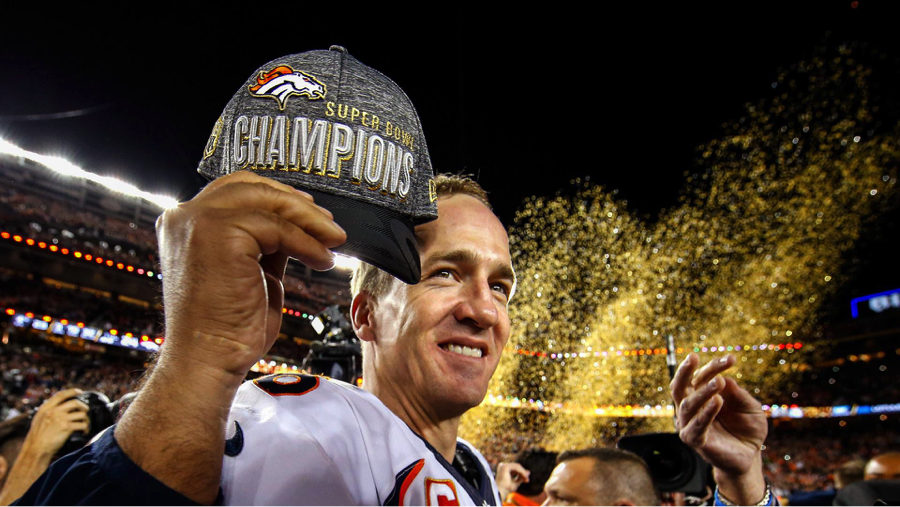 Manning shows off his new Super Bowl gear during the postgame celebration. Photo from sportingnews.com.

If this is indeed Peyton Manning’s “last rodeo,” The Sheriff, with some help from his impeccable herd of Broncos defensemen, went out with a storybook ending by winning Super Bowl 50 at Levi’s Stadium in Santa Clara, CA.

Denver hoisted the Lombardi Trophy after a 24-10 victory in the 50th Super Bowl.

Nearly 119 million people watched in awe as a favored Carolina Panther team crumbled after having a 15-1 season led by the Coach of the Year, Ron Rivera, and MVP and Offensive Player of the Year, Cam Newton. Denver’s suffocating defense and impressive offense were simply too much for an up-and-coming young Panthers squad. Although the Broncos outplayed Carolina defensively, Peyton and the Bronco’s offense had a notable night; Manning finished 13-for-23 for 141 yards with one interception.

The Broncos put points on the board with a 2-yard rushing touchdown from C.J. Anderson, three field goals from Brandon McManus, and a fumble recovered touchdown after a strip sack of Newton by Von Miller for a recovery touchdown by Malik Jackson. The Broncos had an early 10-0 lead, held it to 13-7 at halftime and eventually came out on top 24-10.

Newton, known for his touchdown dances and celebratory antics, defended his criticized celebrations to reporters earlier in the season.

The Broncos did just that.

Led by Super Bowl MVP Miller, Denver’s top ranked defense pressured Newton and clawed through the Carolina offensive line better than any other team the Panthers faced this season. Miller seemed to be in the center of every play, and he had quite the night recording six tackles, two and a half sacks, two hurries, two forced fumbles, and a pass deflection. Newton and the Panthers were held to one touchdown; a one-yard rush by Jonathan Stewart.

After having arguably one of the best seasons in NFL history, Newton had far from an MVP performance in front of the 71,088 spectators. In addition to being held to just that one touchdown, Newton was sacked six times for negative 64 yards, only completed 18 of 41 pass attempts for 265 yards, and had a season-worst 55.4 passer rating. Plus, Newton threw an interception and fumbled twice, one of which resulted in a Broncos defensive touchdown.

Newton was not happy to say the least. He angrily answered reporters with short, bitter answers and barely gave the Broncos the credit they deserved. Despite the understandable pain of a Super Bowl loss, Newton lacked professionalism in the way he handled the media, and he even walked away in the middle of the interview instead of staying. The smile and crazy triumphant antics Newton displayed all season disappeared as the clock ticked down to an inevitable Broncos win, and they stayed hidden for the rest of the night. Before leaving Cam did offer some hope to Carolina fans.

When asked to give a message to the Carolina fans, Newton said, “We’ll be back.”

Aside from, “How did a 17-1 Carolina team play this badly?” the biggest question at the end of the night was whether Peyton would ride into the sunset with his two rings and historic career. Manning surely had a special night with the victory, but he wasn’t ready to decide whether it will be his last.

He told reporters after the game, “I’ll take some time to reflect.”

After 18 seasons in the NFL, this 5-time MVP has truly epitomized the role of a classy, talented quarterback who played his heart out and showed great character.

Whether Manning decides to follow the same path as Broncos owner and legendary quarterback John Elway and retire on top or he chose to stay in the league, Broncos fans will be forever grateful for his epic career and performance en route to the Broncos’ third ring, and Peyton Manning’s second.