Behind the Bylines: The Trailblazer’s Editorial Staff 2017-18 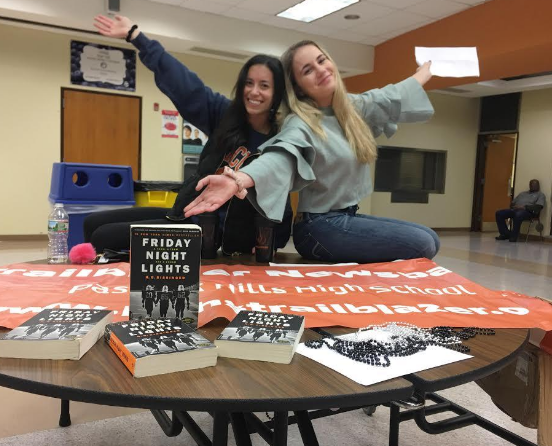 As students of Montvale and Woodcliff Lake dreadfully returned back to Pascack Hills this past August after a sun-filled summer, a “revamping” of The Trailblazer took place alongside them. First-year English and Journalism teacher Alexandra Pfleging and longtime AP English and past Journalism teacher Shawn McDonald, with the help of 17 student editors and managers, are successfully reviving The Trailblazer.

Olivia “Liv” Lein and Hanna Kimball have been on The Trailblazer staff since their freshmen years and have worked up to their Editor-in-Chief positions. This is Lein’s second year as EIC and plans to continue writing at the University of South Carolina in the fall. When not uploading articles, Lein is most likely creating next season’s fashion trends and putting together a trendy Instagram. Graduating with the Class of 2019, EIC Kimball is very involved with the Pascack Pi-oneers, the district’s robotics team.

Nate Barcus and Josh “Coop” Cooper have both been writing for The Trailblazer since their “frosh” years. As juniors, Barcus and Cooper are Co-Editors of the Sports section. Barcus plays both basketball and baseball for Hills, while Cooper runs cross country and is on the tennis team. Both Barcus and Cooper love writing about high school, collegiate, and professional sports, almost as much as they love filling out brackets for March Madness or participating in their Fantasy Football league.

Amber Leung has been writing for The Trailblazer since her freshman year at Pascack Hills. Through her years, Leung has taken the role of Opinion Editor for The Trailblazer. Along with expressing her opinion through writing, Leung can be found strutting the hallways of Hills in the latest fashion styles.

Going into his third year writing for The Trailblazer is senior Kyle Hammalian. Hammalian is the Current Events editor, facing issues from presidential elections, to the refugee crisis, and making them understandable for high school students. Hammalian does not know where he will be continuing his education yet after graduation in June, but currently participates in Civil Air Patrol.

Olivia “Liv” Uribe has been writing for The Trailblazer since her sophomore year at Pascack Hills. This school year, Uribe took on the editor position for the College Corner section. After graduation, Uribe will be transitioning from Cowboy to Bearcat as she will be continuing her educational career at Binghamton University.

Juniors Skylar Bachman and Sophie Mazzei have been on The Trailblazer staff since their freshmen years and have worked up to their Life and Style Co-Editor positions. This both Bachman and Mazzei’s first year with an editor position and hope to keep their positions the following school year. When not researching the latest trends, Bachman is most likely re-watching Jersey Shore. Also graduating with the Class of 2019, Mazzei can be found working at Lifetime Athletics’ Kids Academy.

Junior Alexandra “Alex” Truszkowska is on her third year of writing for The Trailblazer, and has earned herself an editor position. Truszkowska is Pascack Hills’ Arts and Entertainment editor, covering everything from pop-culture news to book reviews.

Eric Traub and Matthew Wikfors have both been writing for The Trailblazer since their freshmen years. As a sophomore and junior, Traub and Wikfors are Co-Editors of the In-Depth section. Both Traub and Wikfors love writing about anything from politics to local news and hope to keep their co-editor positions next school year.

Elena Boggio has been working for The Trailblazer since her freshman year at Pascack Hills. Through her years, Boggio has taken the role of Technology Manager for The Trailblazer. After graduation, Boggio will be transitioning from Cowboy to Husky, as she will be continuing her educational career at Northeastern University.

Sophomore Jolie Newman is only in her second year of writing for The Trailblazer, but has already earned herself an editor position. Newman is Pascack Hills’ Poll editor, creating weekly online polls relating to all sections of The Trailblazer.

Stellie Leibowitz and Melanie Meisner have been on The Trailblazer staff since their freshmen years and have worked up to their Social Media Co-Manager positions. This is Leibowitz’s second year as Social Media Manager and is attending the University of Michigan this fall. When not posting on The Trailblazer’s Instagram, Snapchat, and Twitter, Meisner is most likely making popcorn or editing the script for the school news show, The Cowboy Roundup.

The Trailblazer’s editorial staff works hard to propose, write, and publish localized articles. The application for the upcoming school year’s Trailblazer editorial staff has been released and is due by April 27 with no exceptions.

Maintain a B+ or better in your English class
Be responsible for a new pitch doc weekly that is signed off on by an advisor
Take responsibility seriously
Obtain a recommendation from your English teacher
Have at least five articles published in the last year.

To be submitted directly from teacher to advisor

Five articles printed with your application

The return of the Pascack Hills Trailblazer has been the greatest yet, and is ready to take on the 2018-19 school year.