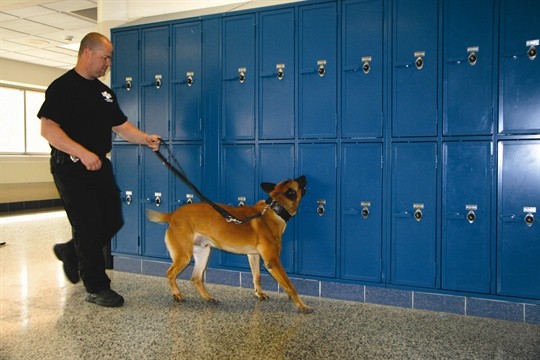 On Friday, November 14th, the Montvale Police Department, the Bergen County’s Sheriff’s Office, and the Prosecutor’s Office conducted a drug sweep of Pascack Hills and Pascack Valley High Schools. While the students were up at the field for a bomb threat evacuation drill, specially trained K-9s swept randomly selected classrooms for drugs in students’ bags. Several students brought their backpacks up to the field during the search, but someone was there to collect the backpacks and bring them back down to the school. After the classrooms were searched, the students were allowed to go back to their classrooms while the dogs swept the parking lot for any drugs in the students’ cars. As soon as this drug sweep began, superintendent Erik Gunderson of the Pascack Valley Regional High School District sent out an email describing the search to all of the parents. The results of this search were not particularly surprising. Two bags were marked as suspicious by the K-9 units, but both ended up being clear of drugs.

According to the email sent out by the superintendent, the purpose of this search was “to help [Hills and Valley] maintain a safe and drug free school environment.” When I spoke with Mr. deMarrais about the search, he said that it is crucial to keep drugs out of the school, and as the principal of Pascack Hills, one of his main concerns is to make sure that there is a “safe and secure school environment; one that says we care about our kids”. Mr. deMarrais also told me that the search was planned well in advance during the month of August and said that it was not a result of any particular suspicions of drug possession by students. It was instead, “ a proactive and preventative measure” meant to keep the school drug free.

The ethicality of this search as well as other searches similar to it is a controversial topic. On one hand, searches like the ones performed at Hills and Valley help keep the schools safe and drug free. However, some feel that these searches are unfair because they are, in many cases, performed without probable cause. The New Jersey Student’s Rights Handbook states that some students and parents have “expressed concern at the use of dogs sniffing students’ belongings for contraband without any suspicion of wrongdoing on the part of individual students.”

While the ethics of this search may be questionable, the legality of it is not. According to the Student’s Rights Handbook, courts have upheld the rights of schools to use dogs to search student’s lockers. The general reason for this is that these searches are relatively unobtrusive, and keeping drugs out of schools is extremely important.

Schools have much more flexibility with regard to searches than law enforcement does. Probable cause is defined as “sufficient reason based upon known facts to believe a crime has been committed or that certain property is connected with a crime.” Outside of school, law enforcement officers must have probable cause to search someone’s property. This is not the case in schools; school officials are allowed to search a student’s property solely on the suspicion that something illegal may be found.

Regardless of whether you feels that the drug sweep was fair or unfair, right or wrong, or good or bad, it is important, as a student, to give these kind of issues some thought and understand the facts, so that you can be well informed and have a say in regard to your rights and your environment.