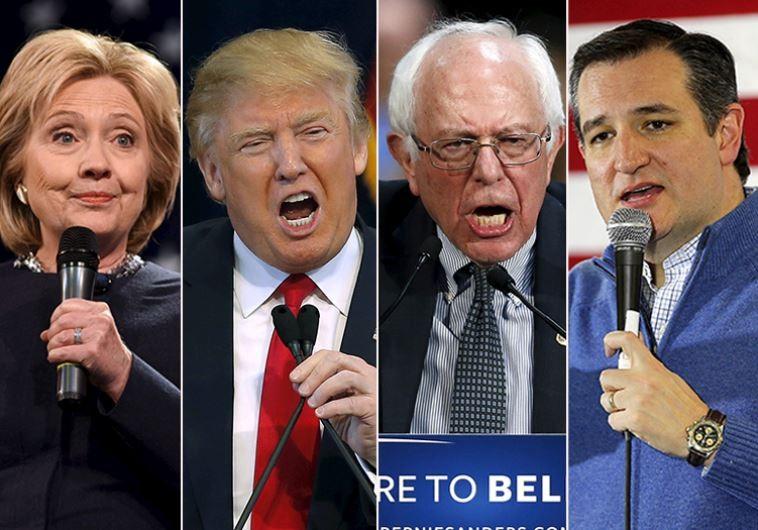 The political candidates still standing in the race to the White House. | jpost.com

The following is an Opinion-Editorial.

This past Easter, the dreaded family dinner conversation surfaced while waiting for the dessert: Politics. We’ve all been there. Three generations of a family, who always seem to be a very diverse group of people with differing stances on virtually every social issue, speaking their mind. And then, there’s you, sitting there awkwardly while your grandfather and aunt debate over economic policy “X” and Eastern European conflict “Y.” But like many other young people, I’ve found this presidential race to be both especially interesting and eye-opening, primarily due to the array of different candidates.

Some see Donald Trump as a putrid attention-seeker who has no business in the political field. Some see Hillary Clinton as a liar who, despite her undeniable experience in politics, would be an untrustworthy President. Some see Bernie Sanders as a blinded old man whose socialist agenda will tear the country to the ground. And, on the contrary, many like these people as well.

Regardless of how you feel, it’s hard to argue that the familiar faces of Trump, Clinton and Sanders aren’t the reason that more young people are shaping their political beliefs and actively voicing their opinions than ever before. But, despite this influx of young voters, there are an abundance of teenagers that still don’t think their vote, or any vote, matters.

And because of this assumption, they choose to pay as little attention to the presidential race as possible, managing to avoid the news articles, debates, and political advertisements that seem to pour in hourly.

The idea of adulthood may seem daunting to some, but it’s still vital to follow the presidential race and begin to develop opinions on certain issues now, for these beliefs you form will open your eyes to what’s really going on in the world.

Senior Grace Johnson agrees, saying that, “Before this year, I would just root for with whatever political [candidate] my family sided with. But now that I’ve been following the race and watching just a few minutes of each debate, I can proudly say I’ve formed my own beliefs.”

This segways into a very important point. It isn’t unheard of to be voicing your support for whatever mommy and daddy like, but hey, you’re growing up, and no matter what grade you’re in, you will be of age to vote in the 2020 election. Though in 2016 a vast majority of us won’t be able to “Feel The Bern” or “Make America Great Again,” we can use this time to find out how we feel about certain issues. This is a historic election, and no better time to form your opinions on so many different issues.

This should go without saying, but following politics will result in a spike in your overall intelligence. A study conducted by Business Insider shows that reading political articles and stepping outside of your comfort zone will make you smarter, and for teenagers, these two go hand in hand. Reading articles about politics and educating yourself on the beliefs of liberals and conservatives will further help you stray away from the beliefs of your family and friends and mold your own opinions.

So, can you even vote in the upcoming election? Maybe, if you’ll be 18 by November 8. For more information on how and when to register, click here. Will your vote really matter in the grand scheme of things? Potentially, but not a guarantee, especially if you live in a state that’s frequently “red or blue,” such as New Jersey.

But, will following politics give you a chance to find out your thoughts on topical issues that will make you seem like a more well-rounded, intelligent individual? Absolutely.

This is your future. Even if you can’t vote, you should know whether to cheer or jeer, based entirely on personal beliefs, when a new president is elected in the fall.

Not to mention, you can say what you’ve always wanted to say to Aunt Rosie now instead of sitting in silence waiting for the mashed potatoes.