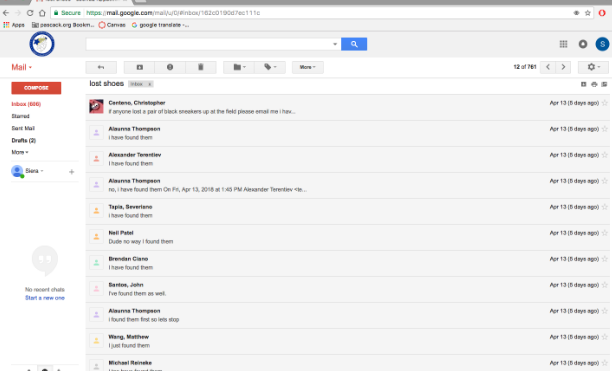 NOTE: This is a SATIRICAL article based on true events.

PHHS- Last Friday, shortly after lunch, an unsanctioned mass email was sent to the student body of Pascack Hills. The brief email claims that a pair of black shoes were found, and asked if anyone had lost them. Then something unusual happened: a student “Replied All” to the email, saying “I found them.”

Then came the chaos. 10 more students Replied All claiming to have found the shoes.

The owner of the shoes, who chose to remain anonymous, said “When I saw this I started to get really excited. Everybody said that they had shoes, and they all thought they were mine!”

At around 1:55 PM the email chain topic became less and less about shoes. A Pascack Hills upperclassmen said “I was falling asleep in Post Malone’s (Mr. Postman, Mathematics teacher) AP Stats class, I checked my email and found this school-wide flame war. It was just fantastic.”

Even some faculty members found the email chain to be amusing. According to Mrs. Shawn McDonald: “I was following the whole thing. I would have partaken in the silly emailing, but my computer died. And, I don’t like breaking the rules.”

Speaking of breaking the rules if you are a current junior who took AP U.S. History last year, Mrs. Horn most likely wants to speak with you. You can contact her at [email protected]

Mr. Goodman (History teacher) had his own thoughts on the scandalous email chain. “As the Economics and Sociology teacher I am an expert on this topic that I know nothing about. The students these days, man that’s a terrible way to start a sentence! Anyway, the students these days, they are obsessed with mimics. All they do is mimic. I see it happen every day to the same kid in my Period 4 class. You know who you are. And this email is one long, school wide mimic. That’s all it is. Also, Hoover is underrated and JFK was assassinated by the CIA.”

Computer Science teacher, and the guy who says he can change on your grades on Genesis but really can’t, Mr. Uhl, was not available for comment. A source familiar with the situation says that he was busy playing games with his erasers and Expo markers.

By 2:08 PM the shortly lived Emailgate at Pascack Hills ended with a Cease and Desist email from Athletic Director, and the man with the most determined eyebrows, Mr. Paspalas. Paspalas thanked students for their “immediate cooperation,” and ended with his class signature, something about responsibility (which high schoolers really take seriously, amirite?).

The Cease and Desist was co-authored by President Trump’s personal attorney Michael Cohen, and in the recent FBI raid all the school’s Macbook Air receipts were confiscated. *Whomp whomp whomp*

We will be following up with constant updates on “Emailgate @ Pascack Hills.”