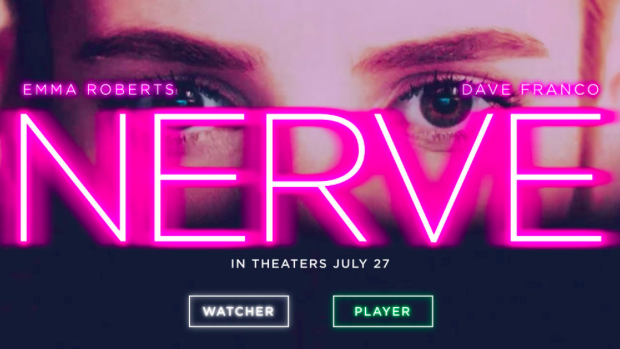 ** Warning: This review MAY contain spoilers **

Whether you liked Emma Roberts’ characters in the hit TV show “American Horror Story,” or couldn’t stand them, Roberts is back; this time on the big screen with fellow actor Dave Franco. This thriller follows Long Island high school senior Venus (Vee) Delmonico who decides to join the über popular online game, “Nerve.” After being called out for “wimping out” and being soft spoken, Vee decides to become the latest player of Nerve. Explained as being “Truth Or Dare but without the Truth,” Vee thinks that by playing and completing the dares she will prove her friends wrong and even gain their respect.

Nerve is an online phone/computer game created by the people, for the people. With basic rules and constant adrenaline flowing through the players, the game has taken over the majority of teens/young adults in the New York City area. There are three simple rules in the game: All dares must be filmed on the player’s phone, all money is revoked if you lose, and if you report the game to the police you become a “prisoner” of the game. The game is set up into two sections and offers people the question: Are you a watcher, or are you a player?

Those who watch select dares for players, send money for completed dares, and decide who continues to the finals.

Although players play for the adrenaline rush and money, with basic dares offering about $100, many play for the total money in the end. Dares have three options: you complete the dare and receive the money, you bail, or you fail. However, if you ever bail or fail, no matter how far along you are,you lose all of the money you have won so far. This keeps the competition of the game high and cutthroat. If you are afraid of heights, I strongly suggest you don’t play.

Vee faces challenges like angry friends (played by Emily Meade & Miles Heizer), other players who she can’t seem to trust (played by Machine Gun Kelly), and the watchers seem to enjoy forcing a boy she met while doing a dare (played by Dave Franco) to work with her. This “mysterious” boy she meets while doing a dare reveals himself as his online screen name Ian.Vee and Ian work together on challenging dares until they reach the finale of the game and their final dare is bestowed upon them.

Nerve included many popular social references throughout- using Spotify, Facebook (which could have been updated to Twitter in this day and age) etc. Nerve also played music from indie rock artist Melanie Martinez, electropop artist Halsey, and even included some questionable rapping of Wu-Tang Clan’s “C.R.E.A.M” performed by Roberts.

Although “Nerve” has a received a 55 percent score on Rotten Tomatoes from their official critics, 77 percent of the regular audience enjoyed the movie. Receiving a ⅘ from the audience, this truly is a “teen” movie, full with the typical love story and friend falling out. From my point-of-view, I took half a point off because the end was not as “crazy” as I expected or would have liked. During most of the movie, I was on the edge of my seat, holding my breath, due to the jolt of the actions the characters take. The ending could have been more thought out-and minus the social lecture we received from Roberts. I give it an overall: 4 ½ / 5 stars for the exhilarating yet bracing movie that is Nerve.