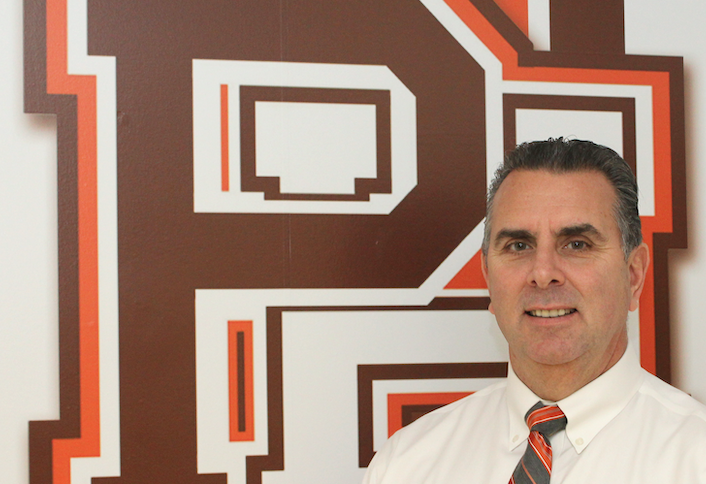 Hills Principal Glenn deMarrais, in a photo taken upon the announcement of his retirement in January. deMarrais has since been approved to step in as Valley’s principal next school year.

From ‘Hills Pride’ to ‘Wagon Wheel’: deMarrais’ impact on Hills

From the beginning, Principal Glenn deMarrais has left a large impact while at Pascack Hills, but many people might not know how he made it to where he is today.

As a senior in high school, deMarrais decided that he wanted to major in business and went to Wilkes College in Pennsylvania; however, he quickly changed that path and became an industrial arts teacher instead.

“I never thought I would’ve become a principal, as I loved teaching and coaching,” he said.

When Mr. deMarrais reflected on the night he was hired, he felt the same adrenaline as the night he got the call.

“That day –– I get chicken skin just thinking about it –– I went through many interviews and thought I had done pretty well. [Superintendent Erik] Gundersen said he would be in touch in a couple of days, but they had a meeting that evening, and [he] called me the same night telling me I got the job,” he explained.

Mr. deMarrais stands out for the bonds he forms with the students and staff at Hills, and he said that he’ll miss them the most when he goes to Valley in the fall.

“I love getting to know students and staff members,” he said.

One goal Mr. deMarrais had was to be the most visible principal. Instead of doing paperwork in his office, his conscience would tell him to get out into the halls and classrooms.

Oftentimes, Mr. deMarrais would be seen standing with Hills’s assistant principal, Mr. Wieland, who will be the school’s next principal as of July 1. Working together has left a great impact on Mr. deMarrais –– a relationship that he ensured will definitely remain, even beyond his temporary appointment as Valley’s principal next school year.

“Wieland has inspired me since the day we met. We learn from each other every day, but he taught me to see every side of a student and to focus on their strengths,” he said.

In addition to perspective, Mr. Wieland and Mr. deMarrais have shared –– and continue to share –– conversations ranging from deep to light-hearted.

“I will miss our daily curbside conversations. We laugh together, and we talk about serious things as well,” he said.

Mr. deMarrais’s morning conversations go beyond those with Mr. Wieland.

Senior Maddy Grabow stated, “Every morning, he stood outside when we walked into school to greet us with a big smile to start the day.”

Known for playing “Wagon Wheel” by Darius Rucker every Friday after school and showing Hills Pride online and in-person, there are more sentimental moments that cause Mr. deMarrais to stand out.

“When you hear ‘Wagon Wheel,’ students start thinking of Hills. Many past students will text me about hearing it,” he said.

This sentiment goes beyond just the students. Teachers and Trailblazer co-advisors Ms. Vani Apanosian and Ms. Alexandra Pfleging look forward to hearing the song every Friday.

“We always sing the song in our classroom at the end of the day. When I hear it playing on the radio it always makes me think of Fridays at Hills. It makes me smile,” Pfleging explained.

This tradition ties into his saying for the school, “Hills Pride.” deMarrais’s signature always reads “With Hills Pride,” and he enforces that in all clubs and sports that students partake in.

“As a coach, we always talk about playing for the name on the front of your jersey, not the back. Every time you put a Pascack Hills jersey on, no matter what sport it is, you are representing your school so do it with pride,” baseball coach and algebra teacher Kevin Kirkby explained.

From his teaching perspective, he also remarked that he hopes he can prepare his students for life after Hills, and to keep the school’s reputation well, which goes back to deMarrais’s message of being proud of your school community.

The relationships Mr. deMarrais establishes are not only seen in the staff members but the students as well.

“Mr. deMarrais is one of the most caring principals I’ve ever had. It’s clear that he cares about the well being of all his students, but as a member of the theater program, he has gone above and beyond to support us and it has been really incredible. When all of the theater members found out he was leaving, everyone was upset since we don’t know if we’ll find anyone as amazing as him,” sophomore Riley Solomon said.

The support deMarrais gives to students can come from the simplest conversations.

“Whenever I have small talk with Mr. deMarrais, he is always super nice and never angry,” said sophomore Kailani Perez.

Junior Aria Chalileh described deMarrais as “very friendly and always open to help anyone out with anything they need.”

“Mr. deMarrais is an amazing role model and principal. He truly cares about every single student and is compassionate. I am so lucky to have been able to know [him],” said Grabow.

Unfortunately, quarantine has prevented the students and staff at Hills from enjoying these small moments and traditions with Mr. deMarrrais at Hills, but he did not cease to show his support, especially to the class of 2020.

“Mr. deMarrais has been the best all four years of high school, but especially during this hard time. His Friday dismissal videos make me smile or cry thinking of all the amazing memories I’ve had at Pascack Hills. He has also made us a graduation video that will be played on June 16, a senior parade so we can say goodbye to all of our teachers, and a real graduation in July,” senior Meg DeLange explained.

In addition to these arrangements, Mr. deMarrais helped organize a surprise lawn sign mission and special cap and gown delivery for the Hills graduating class.

Teachers at Hills surprised seniors with their caps and gowns –– safely and distantly –– in hopes of cheering them up during this unexpected situation.

Ms. Yeam, one of the teachers who participated in this delivery, described her experience.

“When Mr. deMarrais emailed the faculty asking for teachers to volunteer to deliver caps and gowns, I immediately opened up the spreadsheet for sign-ups, and there were already other colleagues on the document signing up for students to deliver to. Seeing the popularity of this opportunity to make graduation even more meaningful for our graduating seniors, I immediately went to find the three students I wanted to personally deliver their graduation caps and gowns to Amanda Kern, Christian Kim, and Melina Kobolakis,” she said.

Yeam continued to explain that the idea planned by deMarrais became so popular that the list had been full within two hours, and a waitlist had been formed. Of course, he stepped in and helped in allotting the faculty placed on the waitlist the ability to participate.

This shows that Mr. deMarrais’ small actions are profound because he always considers the students’ and staff’s best interests.

Clearly, most –– if not all –– of the members of the Hills community will miss Mr. deMarrais when he moves to Pascack Valley. Instead of simply being in a position of authority, he puts in the effort to connect with as many people in the school as possible, formulating bonds that will remain long after he leaves Hills. 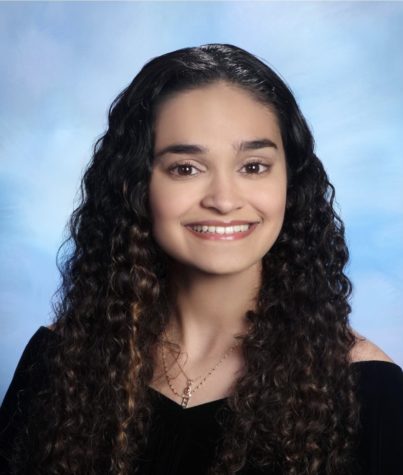 Briana Keenan is a senior at Hills. She joined the Trailblazer her freshman year as a staff writer and edited for the In-Depth and School News sections her sophomore and junior years, respectively. This year, Keenan is looking forward to being the publication's Editor-in-Chief and continuing to write, edit, and manage stories for the Hills community.

Fun fact: Over the summer, Keenan went to the School of the New York Times for two weeks.