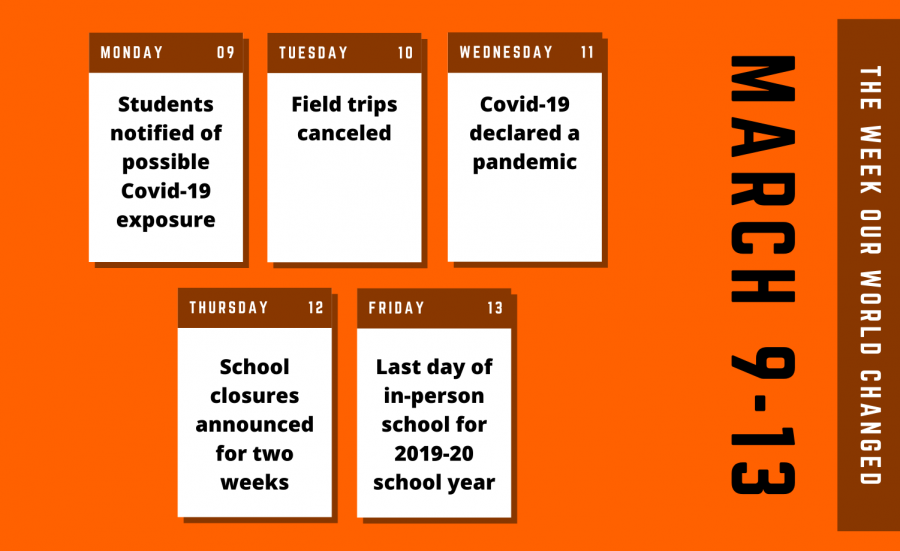 The closest comparison to the week of March 9 is when the school is expecting a snowstorm to hit. This time, the forecast met the agitation that preceded it.

It was Sunday, March 8 at 7 p.m. I’d just gotten off my shift at Wegmans, where I had spotted the first masks being worn and checked out too many “panic purchasers” to count. As I was leaving, I overhead my managers talking about preparing the store for a shutdown. Naive at the time, I didn’t believe the dire scenario they were preparing for was already upon us.

The following Monday, one dull and dreary, I made my way through the deceitfully normal school day. I got to the end of second period when my debate partner and I received an email from our coach, Ms. Deborah Horn: “Please come see me today when you get a moment.”

At this point, practically every student was obsessed with reports of the coronavirus, a respiratory illness that wasn’t yet a pandemic as it devastated countries like China, Italy, and Iran. At Hills, like many other schools, there was more speculation than seriousness; we had no way of knowing just how deeply embedded the virus already was in our area.

But what my debate partner and I did know, when we received that email, was that it was somehow, in some way, related to Covid-19. As soon as the bell rang, we made our way to Horn’s classroom, where she notified us that students at a school we had debated against the week prior were being quarantined and tested for the virus. They had been exposed at a bar mitzvah which became one of the first Covid-19 stories in the United States to dominate headlines.

What the next few days taught me, my classmates, and the world was that it is really hard to take something seriously until it tears the fabric of everything you’re accustomed to. In this case, the coronavirus was like a rotary cutter.

It was Tuesday, March 10, and I began to feel the cutter tearing through the fabric of our lives. Superintendent Erik Gundersen announced all international school trips were canceled. Notably, he addressed the potential for school closure, putting into official language the almost-incredulous gossip among students and staff.

As facts later proved, our panic was never more widespread than the virus: These same days friends and myself had worried due to, but not seriously considered the threat of, each cough or sneeze, reports of flu-like illness were approaching a peak within Bergen County. Test capacity was not yet enough to document the spread of Covid-19 underway.

It was Wednesday, March 11. I wrote my first article for the Trailblazer on Covid-19 –– in hindsight, now a tertiary source from pre-pandemic times.

But it was still class as normal. I remember a lab in AP Physics learning about electricity and circuits. During Pascack Period, it was hard not to notice others hesitate to touch the therapy dogs the school graciously brings around most weeks. So began a monthslong journey of social distancing which, if we stop adhering to, risks the progress we’ve made thus far.

The closest comparison I can make to the week of March 9 is when the school is expecting a snowstorm to hit. Those most in-tune with the weather first begin to talk about the “potential for snowflakes,” and excitement quickly builds for a heavenly snow day.

Oftentimes, that excitement –– in reality, the opposing force to the boredom we have with normality –– never quite meets the moment that succeeds it. The snow accumulation doesn’t live up to the forecast. Or it turned out to be an ugly mix of sleet and rain.

So it was almost unexpected when, on Thursday, March 12, the widely expected happened: Bergen County announced the closure of all schools for two weeks.

The decision coincided with a stoic address to the nation from President Trump, in which he announced a ban on all travel to and from Europe –– causing trouble for college students studying abroad in particular and igniting an emotional debate in my AP Language class the next day over its effectiveness. Tom Hanks tested positive for the virus in Australia that same day, and from that point, we all knew the pandemic was here.

But few considered that March 13 –– over three months ahead of schedule –– would be our last day at Hills for the entire school year. I never truly considered it, despite the ominous warnings from my English and Spanish teachers and the long-term compatibility my physics teacher emphasized in his virtual plan, determined to complete our education on circuits. Did anyone truly believe then that it would last this long –– for three months?

Did anyone know then that March 13 was the last day seniors had of making the wonderful memories their final year in high school was destined to create?

Did anyone know then that March 13 was the last time we’d greet Principal deMarrais on our way into school, or that it was the last Friday of the year we’d listen to “Wagon Wheel” on our way out?

I know that, as we end our school year formally through email goodbyes and Zoom well-wishes, there are thousands of people who have lost a loved one to this illness, one that I hadn’t measured the gravity of until the predicted forecast arrived.

I know that, by experiencing the eagerness to return to normal life now that officials are loosening restrictions, few of us want to go back to virtual classes and online exams. None of us want to miss any more hallmarks of our high school career –– especially an in-person graduation, which is now scheduled for the Class of 2020 on July 8.

I am grateful that, despite the circumstances, Hills has nevertheless persevered. The National Honors Society hosted contactless food drives for local pantries, and the Hills-Valley equity team organized a protest against police misconduct despite the circumstances. Teachers and administrators have put great efforts into honoring seniors, organizing late-night sign drop-offs and recreating events, while continuing to do their jobs well despite the virtual barriers.

No matter the triumphs of virtual school, it is still far from ideal for anyone. And despite our success in slowing the virus, we risk being far from done with it.

By little fault of our own, we were too naive to stop Covid-19 in March –– naturally constrained by the limits of what we knew and had experienced in our lifetimes. But we aren’t now –– we know the facts, whether we want to acknowledge them or not. If we refuse to wear masks when guidelines tell us to, and if we forget the gravity of this illness that has killed so many, it may take much, much longer to return to the lives we lived innocently before March. 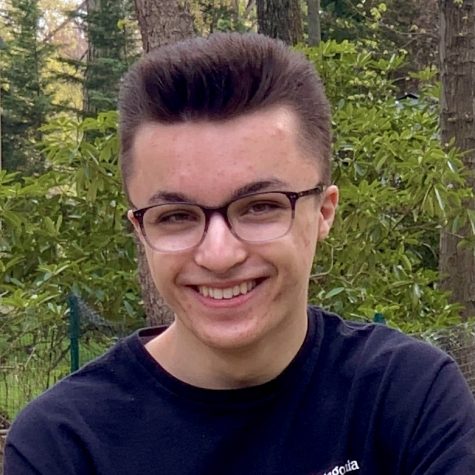 Jared Mitovich joined the Trailblazer his freshman year as a staff writer. He has helped manage the Trailblazer's social media since his sophomore year, and in his junior year he edited the Opinion section. Now in his final year of high school, Mitovich is looking forward to working with Mackenzie Blowers as Editor-in-Chief along with the entire Trailblazer staff. You can follow him on Twitter at @jmitovich!